1.  I noticed from the photos that you sent last week that you are using your backpack.  Have you decided that you like it better than your shoulder bag?

So the situation with my backpack is basically that the shoulder bag that I bought from that guy in the centro in Tapachula broke already.  So I´m back to my backpack.  Which I kind of like better anyway because I can hold more stuff if I want to and also I don´t think it´s going to twist up my back.  And, since it´s made by UnderArmour and we bought it in the US, I´m hoping it will last me more time than the shoulder bag.

2.  Are you feeling okay?  You haven't mentioned much about your health--I hope that no news is good news.  I can only imagine that it was a huge shock to your system to walk so much and to eat so differently.  I hope that you have adjusted!

So basically I´m doing well healthwise.  The only complaint I have right now is that we just got back from a zone activity (that´s why I´m writing so late), and we played soccer in the sun for hours and I got schooled by the Mexicans basically.  So my head kind of hurts and I´m going to be way sore but it was fun.  But I´m pretty accustomed to the food and heat here, even though the first couple weeks threw me pretty hard for a loop healthwise, and I was pretty sick.  But President told us that we shouldn´t tell our families when we´re sick while we´re sick, and I didn´t want to worry you guys, because it wasn´t really that big of a deal.  Every once in a while someone still gives us something weird to eat and it makes me sick, but that´s why I asked Mom for the Pepto Bismal, and I take a pill and makes me not sick again.

Well they don´t really eat bugs here that much.  The only really weird thing I´ve eaten so far that I did not like at all was panza.  Which is cow stomach.  And it smells horrible.  Like seriously apesta bien feyo.  I ate about a half-kilogram of tortilla and another half-kilogram of lime water to be able to down it. 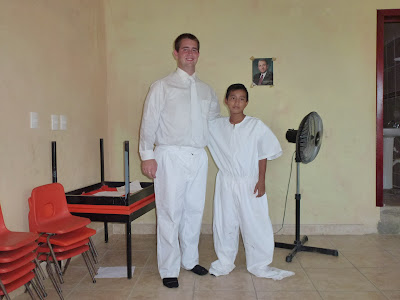 So, we had a baptism on Saturday!  Because it was a boy of 10 years who got baptized (I know that sounds funny, I don´t remember how it goes right now) we actually did it in this bathtub thing that´s in the church (the branch rents a house, it´s like a jacuzzi style bathtub).  Also, we couldn´t find baptismal clothes for him, so his jumpsuit was an adult size.  It´s a little big.

We´ve been teaching Gerardo for a couple of weeks, his mom is a member who recently reactivated (a few months ago).  His stepdad is going to get baptized too, he´s super solid and their family comes to church every week now, but they´re working on some complications with papers in getting married so we have to wait for that before he gets baptized.  That´s a really common problem here. 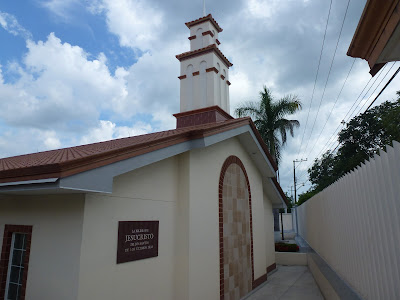 I never sent or took a picture of our beautiful chapel in Tapachula, so I did today at the activity (we played at this soccer field that´s right next to the Indeco/San José building).  I really miss having an established chapel like this with air conditioning and a baptismal font and all that awesome stuff. 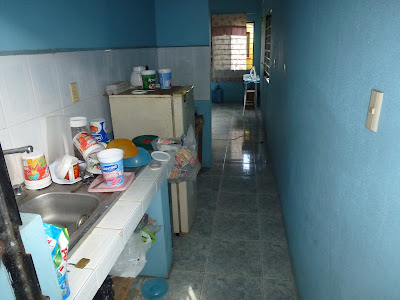 This is part of our lovely house.  For the record, those dished are all clean, that´s just where we keep them.  Also, the non-iron thing about my shirts didn´t really end up being too true, so I have taken up ironing my shirts every day, and there is our lovely ironing board. 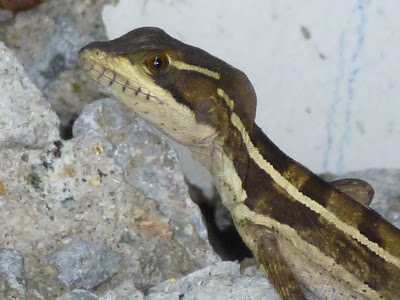 This lizard was like a foot long.  Just chilling right outside our house where we do our washing.  I used the 64x zoom on my camera.  And it turned out way clear.  I was impressed. 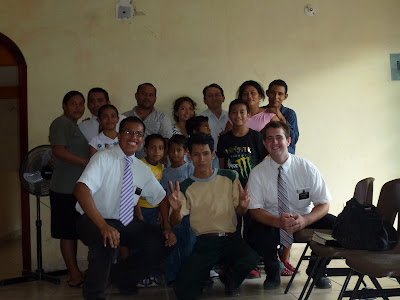 This was right after the baptism.  We have a lot more members in our branch, but most of them are slackers and did not come to the baptism.  We´re hoping that as we keep having baptisms, they´ll get animated a little and support us a little more.

Turns out I don´t actually have more emails to send.  Just wanted to say thank you for your prayers, especially in your being more specific.  This week we found two people (a mother and a son) on Friday, and on sunday they came to church.  We´re really excited about teaching them.  I love you sooooooooo much!!!