I can´t believe Adam and Jared already graduated.... and that my graduation was two full years ago and that about two years ago as well I was starting at BYU.  Seriously... where does the time go?

This was a pretty good week.  We´re having a wonderful time here in Chahuites apart from burning to death as usual :) So, I have a couple of cool stories from this week:

--First of all, we found the family that the Lord wanted us to find. :) Right now we´re just teaching the mom and one of her daughters, but she has two other sons and we´re hoping to be able to teach her husband, too.  Our first lesson with her we had an incredible experience. She told us about something that had happened to her about 15 years ago. She lost her first child in an accident, and she told us that for a long time she had nothing to hold on to and that she had constant thoughts of taking her own life. Her little girl had died without being baptized in the Catholic church, and all of her family told her that her child would be in limbo forever and it was her fault. Needless to say, she was passing through a lot of guilt and depression. One day, on the way home from the doctor, she randomly (better said miraculously) found a Book of Mormon laying in the street. Even more miraculously, she opened up to Moroni 8.  Out of all of the 633 pages in the Spanish Book of Mormon, she turned to the only chapter where it talks about infant baptism.  As she read verse 11 and read "little children need no repentence, neither baptism" until verse 12 where it says "little children are alive in Christ" she told us that everything that she had felt just went away, and she knew that it was true.  I am so grateful for the Lord's promises to us.  I know he prepared this sister to recieve the joy of the Gospel, and I know that he kept the promise that He made to my companion and me that we would find this prepared family.

--On a less spiritual note, we rescued an abandoned puppy that´s like two or three weeks old.  I´ll attach a picture in a second.  We´re not allowed to have pets, so we took it to the members that we rent from and begged them to keep it there (but we give it food and take care of it, which is kind of borderline on the rules even though it´s not in our house) until we find it a home.  We plan to do today because it´s probably not ok.  But, it was just abandoned on the side of the road in the pouring rain and I couldn´t leave it there to die.

--Not really a story, but we´re super psyched and happy because the zone is doing awesome. :) Everybody is baptized and working to find their family.  A couple of areas apart from us have already found them. :)

--Also, thank you very much for the package.  I didn´t really mention it last week because I ran out of time.  Seriously, that package was so incredibly awesome.  I LOVE LOVE LOVE the Jon Schmidt "Hymns Without Words" and the BYU Mens Chorus "Set Apart" albums.  On that note, everyone reading this email LEARN TO PLAY THE PIANO BEFORE YOU LEAVE ON YOUR MISSION.  MOM ISN'T KIDDING WHEN SHE SAYS THAT YOU'LL REGRET NOT BEING ABLE TO PLAY THE HYMNS WHEN YOU´RE IN A BRANCH IN THE MIDDLE OF NOWHERE WHERE NOBODY PLAYS THE PIANO OR KNOWS HOW TO SING THE HYMNS.  Ok.  I think that deserves capital letters just so that everyone understands where I´m coming from.  Learn until you can sight-read the hymns and acompany in sacrament meeting.  You´ll be extremely grateful that you did.  I finally got fed up enough with the branch here while they sing that I ordered myself a symplified hymns book from lds.org store to see if I can acompany like that. 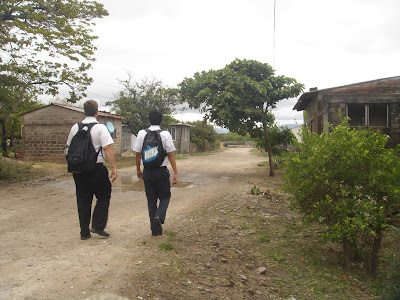 I´ve wanted one of these "walking with the companion" photos for a while so we put the camera on a timer on a bridge and walked by :) and it worked. 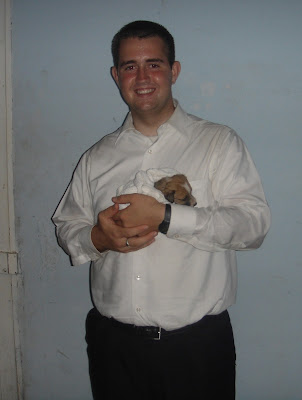 This is the puppy we rescued.  We named him Padrino.  We´re going to find him a nice home today. 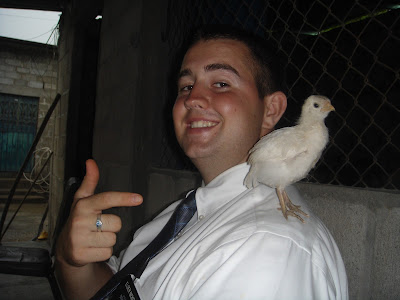 The pollito (little chicken) thought he was a parrot.