While the photos load, I want to tell you that my new area is awesome.  Our area is on the outskirts of Tuxtla, and we´ve got some hills that go up and offer some pretty cool views of the city.  I will load a couple photos of that in a few minutes.  I've enjoyed getting adjusted to the city.  It's very different than what I'm used to.  I was nervous at first and almost got run over a couple of times, but I've got the city life down now.  :)

We´re working hard to coordinate with the members here and as we´ve taught several of them the message of the Restoration (something that hasn't been done here before). We've seen a lot of positive results and I feel like we´ve gained a lot of trust.  We´ve received a couple of referrals and found some people this week that are definitely going to get baptized.

Apart from teaching the members, we´ve also been trying to work with the ward council so that they will fill up our planners with important appointments.  We´ve told them that we want appointments to do the following:

1) Obviously as missionaries we want to teach nonmembers and prepare them for baptism and confirmation.  So, teaching nonmember friends and family members of the members of the ward in the homes of members or at least with the members present.
2) Teach less-active members in the company of presidencies of their respective organization to help them to achieve reactivity.
3) Teach and strengthen active members.

We´ve had a pretty positive response so far, and we´re going to keep working hard so that the stone cut out of the mountain can roll a little faster here in Barrio Juárez.

My companion´s name is Elder Sanchez.  He´s been in the mission for about 11 months and he´s from Guatemala City, Guatemala.  He´s really awesome and we get along really well.  He´s very obedient, a hard worker, and very service oriented.  I´m grateful to be here with him for my last couple of months and I´m LOVING just being a normal senior companion again and focusing all of my energy on proselyting in my own area. :)

But anyway, getting back to my area.  To my pleasant surprise, getting here to Tuxtla I learned that we live in an appartment with another companionship of elders.  I was super excited to learn that the senior companion of the other companionship is none other than Elder Finn, my companion from my last transfer in Chahuites who goes home the same day as me and one of my best friends in the mission. So, that was pretty awesome.  The four of us missionaires play soccer every morning here (on a basketball court, not a field), and then Elder Finn and I go to a field in front of our house and we do sprints. :) He's my workout buddy, so it's been a lot of fun having him around.

Okay--that´s all for today.  You´re all in my prayers, especially Elder Nickerl el español :) I love you all very much. 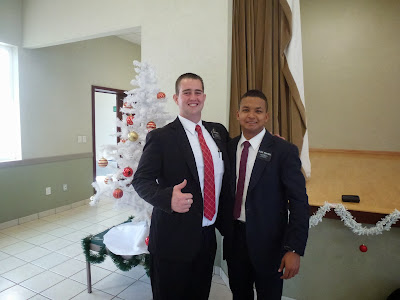 This is Elder Martinez and me at the Christmas banquet.  He was my companion in San Cristóbal.  We got a long great and I miss him a lot. 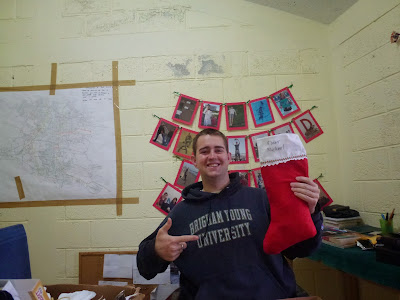 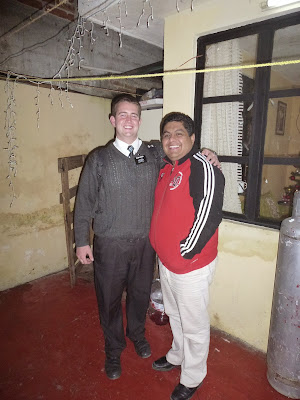 This is the 1st Counselor in my ward in San Cristóbal when I went to say goodbye to him and his family.  He helped us A TON last transfer.  Without him, we never would have gotten the tours in the stake up and running.  We´re definitely going to go visit him and his family when we come back to visit  in March. 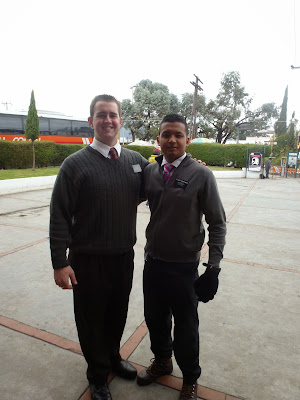 Elder Martinez and me--as we part our ways at the bus station in San Cristóbal. 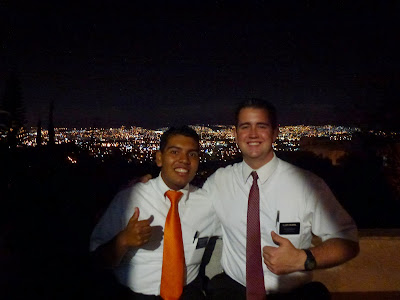 With my new companion, Elder Sanchez.  Our new area is on the outskirts of Tuxtla and we´ve got some hills that go up and offer some pretty cool views of the city. 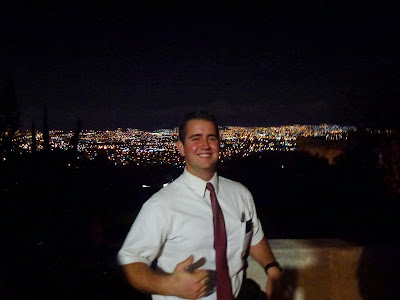 My new area is pretty awesome!