So, this was an awesome week.  Before I forget, I have to share the bad news first that I've been forgetting to tell you for the last couple of weeks. My camera broke. :( The camera itself is fine, but the card slot is broken.  Part of one of the SD cards got jammed inside. Maybe I dropped it or something.  I have no idea.  But the good thing is that the card works too and I still have all of my pictures. But yeah.... needless to say it´s going to be kind of tough for me to take pictures. I guess I´ll just be relying on my comp for the rest of the time that I´m in Chahuites because there´s definitely not a place around here to fix it. If they send me to Tuxtla or something then I´ll be able to get it fixed.

That brings me to my next big news! TODAY IS TRANSFERS!!!! And I´M OFFICIALLY GOING TO......................... CHURCH IN CHAHUITES THIS SUNDAY!!!  Again :) for another 6 weeks! So awesome. But, Elder Reyes is getting transfered :( after almost 6 months of being my comp. But, that´s how it all goes and if all goes according to our plan then this time next year we´ll be roommates at BYU anyway. So, the cool news is that my comp is going to be Elder Finn. He´s from my "graduating class" of elders por así decirlo (don´t remember how to say that correctly in English...). We got here at the same time and we´ll be leaving at the same time.  He´s going to get here tomorrow from Comitán. He´s an awesome missionary and I already know him so I´m pretty excited. And I just love Chahuites so I´m happy. :) I think I´m actually just going to live here after my mission (not really). This is almost for sure my last transfer here, though. I´ve only ever heard once that a missionary in this mission stayed in his area for more than 6 transfers... and it´s now my sixth. So yeah. That´s what´s going down with transfers.

So, this week we had a really awesome opportunity to find some new investigators. We were looking for a referral that the sister missionaries had given us and just asking around with the people who live around there so that they could tell us where the referral lived. We asked this one lady and she said that she didn´t know him, but we said that she was moving a bunch of wood in her yard so we offered to help.  We helped and we also noticed that her two daughters were pulling out the weeds in her yard (which is huge) by hand. Here in Chahuites they usually do that with a machete.  We had never actually worked with machetes before, but we told her that we were going to go back the next day (which was Saturday) to chop her giant weeds down with machetes. We rounded up a couple of the brothers from the branch (thanks to Cristian, our ward mission leader, who you´ve now met, Mom) and went to cut her yard. And that was definitely the most grueling physical labor that I´ve done in my entire life (it didn´t help that we had decided to go on a run that morning, too).  Seriously I´m still out of energy. Cristian took some pictures and said he was going to post them on facebook, which is awesome because I don´t have access to my camera anymore. So anyway, we invited them to church, and then we went with a brother that has a truck and we took them to church the next day. We had 4 new investigators go to church for the first time this week! I love it when that happens :) So, that was a cool experience from this week.  I feel pretty cool cutting grass with a machete. But I don´t think I´ll be doing it again any time soon, though, because I´m beat still. But I think that has inspired me to buy a machete (they´re really cheap here--4-7 bucks depending on the size).

So that´s all :) the work continues to move forward here in this wonderful part of the Lord's vinyard. I love you all!!!  Have a wonderful week! 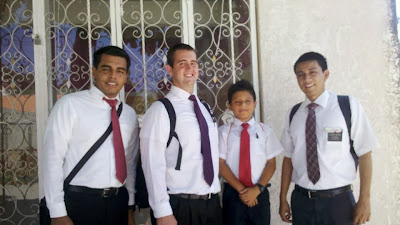 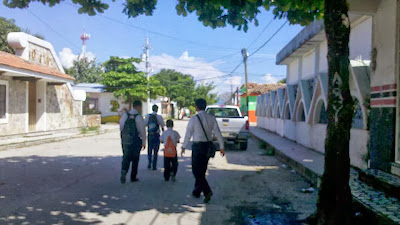 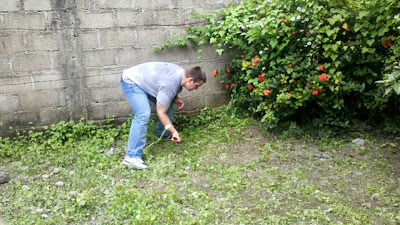 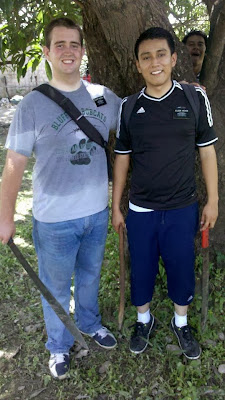