This has been an awesome week! :) I don´t remember if we mentioned it last week or not, but in July, we set the goal of 6 baptisms for August. As of the last week of July, we only had one person with a baptismal date.  Well, she just got baptized, and we were kind of freaking out because we had only been able to find one other person to be baptized by the end of the month.  Doing the math (it´s an incredibly complicated sum... 6 - 1 - 1 = ?) we were still 4 people short, and the way that we prepare people to be baptized is usually over a 3 week period of time (they have to go to church at least twice) and so this week we´re doing baptismal invitations for the first week of September.  So, Saturday after our baptism, the branch president of the neighboring town called us and told us that he had a family for us to teach and that he wanted to take us to see them immediately.  We went with him to see them, and we met another sister.  Her name is Claudia.  She has 3 kids (Osvaldo is 10, Diego is 8, and José is 6) and she´s had a lot of challenges in her life. She´s in the middle of several challenges right now and a separation from her husband. She´s not from here, so she doesn´t have any family to fall back on. So, this branch president had talked with her and of course knew to call us right away.  Yesterday we woke up early and went to pick her and her kids up to go to church. And they loved it. And all of the members were super supportive.  They came up and were hugging her and everything even though they don´t know her yet.  Seriously we have seen such a change in the attitude in this branch in the last couple of months.  It´s been incredible.  We went with some members to visit her yesterday afternoon after church and we invited her to be baptized with her two oldest children on the 31st of August, and they accepted.  So, now we´re only one short of our goal instead of 4 short.  We know that the Lord will put that last person in our path.  And it´ll be two months in a row that we´ve met our goals for baptisms :) and it feels incredible, because we know that we´re doing the work that the Lord expects of us.  When we set goals with the influence of the Holy Ghost, it isn´t just a goal set by us, but a promise from the Lord.  So, we know that as we meet those goals we´re finding and baptizing the people that the Lord has prepared.  We have to set those type of goals to really have success in our lives and not just as missionaries--but everyone.  Here´s a quote from Presidente Cárdenas that I love:  "He who does not have goals calls everything success."  But doesn´t really have much success at all. :)

Anyway, I´m very happy.  I know that I am doing the Lord´s work.  There´s nothing more satisfying in life than seeing the results of dedicated and inspired service to Him in my own life and in the lives of others.  My testimony of this Gospel has been strengthened to a point that I didn´t know existed before. I know that it´s true and that it changes lives and changes people.  I know because I personally have lived it and experienced it.  I've felt the Lord´s love and forgiveness as I repent, followed by an increased capacity to serve Him and help others.  I´ve grown so much in these last weeks and months, and I´m so grateful for all of the experiences, although some of them have been very difficult for me, that have caused that growth.  The Lord is aware of our needs and puts us through His refining fire so that we can grow and be more happy.

I love you all very much.  You´re always in my prayers.  I know that with all of the changes and the start of school, college, and seminary in these next couple of weeks, everything will be okay.  Difficult things might come, but the Lord will take care of it all. 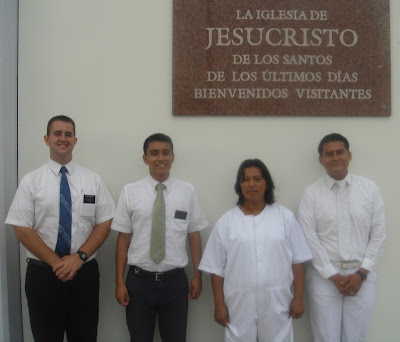 This is Martha.  She´s had some challenges in her life. She´s been listening to the missionaries for more than two years.  Her niece (who is a member) told us to go visit her again, and the Lord had prepared her for baptism.
Posted by Called to Serve: at 5:17 PM