It was great hearing about your trip to Utah this week.  That´s really exciting :) I just realized while reading all this that I´m going to be back there again in about a year and I was like whatttttt where did all the time go?  It seriously goes really, really fast.  Thank you as well for all the pictures!  I really loved the ones at the Y.  I don´t know why--but just I love BYU so much.  It´s just a really awesome place and I´m so glad that Adam and Jared are going there as well :) that makes me really psyched that we´re all going to go to BYU juntos.

So, as normal... not too much time to type.  But I want to send a few pictures today. Just to answer your questions:

I´m doing great and I still love my new area :) We´re going to have a baptism this week! Finally! :) That makes me really happy.  We´re baptizing the same girl that I told you about last week.

It is still very hot.  There´s a lot of wind here though so that kind of cools it down sometimes.  But it also blows dirt all over everything and it´s super dusty here so it can be a pain, too.  We´re still walking a lot.  That´s never going to change. :) My shirts are holding up really really well.  All the ones that Grandma bought me (the CTR clothing brand) really are super awesome missionary shirts.  The first Van Huessen one that I brought is starting to tear up at the collar from so much hand-washing.  The rest of the Van Huessen shirts I now just use for special occasions like zone conferences and stuff like that.  But, I´m doing well with lots of shirts still.  I´ve had to throw away a couple of pairs of pants just from wearing them out after lots of walking.  Could you maybe send me one new pair?  The dang shoes are really what´s a pain.  I was very unimpressed by the shoes I bought here.  They´re pretty shnazzy looking, but not great for walking miles upon miles.  Both pairs are pretty worn already.  One pair I litterally wore a hole through the sole of the right shoe--I´m going to try to get the soles replaced, because they rest of the shoe is still fine.  On the other (and newer) pair, the sole is just tearing off the right shoe.  I don´t know if you can, but if you could send me another pair of the ones that I came with, that would save a lot of money.  And, I was also going to ask for some of those dental flosser things.  Like the ones that are a little stick.  That´s not all that descriptive but I think you know what I´m talking about.

Anyway, I want time to send some pictures so I´ve got to go.  I love you all very very much. :) Have a great week! 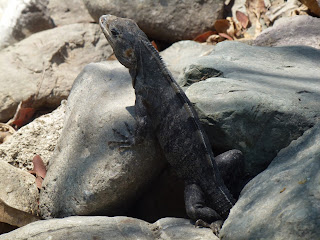 There are lots of iguanas here.  Sorry I´m not in the picture, but the iguana would have taken off running.  I´m still working on finding someone that has a pet iguana so I can get a picture of that.

This is my generation of missionaries.  We saw each other at the conference/zone leaders council with Elder de Hoyos.  Elder Turner and I used to tell each other that they day would come when we saw each other in the mission and we would be able to talk to each other in Spanish just as easily as English.  That finally happened. :) 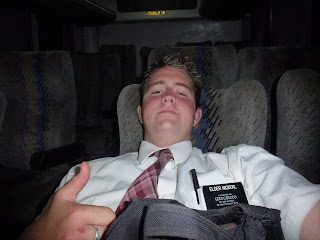 This picture is kind of funny because sometimes with the glue that they call gel here you can kind of create yourself a bad hairday.  I didn´t realize until I took this picture that I had been walking around with an anime-type hair-do all day.  The facial expression kind of accentuates that, too.