I don´t think I´m going to be able to type a letter for the blog today, because I´m going to email Adam and Jared (and Anna and Jacob if I have time) and send some pictures. 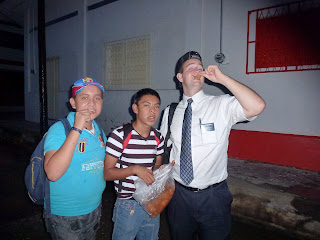 These are two of the three young men in our branch.  I stole Manuel´s hat briefly for the picture (and a few chips). 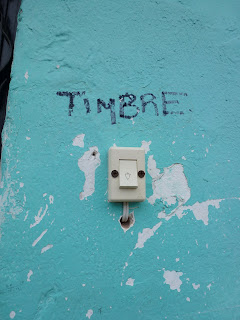 Elder Esparza and I got a kick out of this.  "Timbre" is "doorbell", and we just thought it was super helpful that they helped us to identify where their doorbell was (this is what every doorbell looks like in Chiapas). It was Elder Esparza´s birthday the 16th (which is cool because that´s Mexican Independence Day), so we ate cake.  And it was good.  It cost the equivalent of 4 bucks at the grocery store.  And it kind of tasted like it cost 4 bucks.  But it was still nice to eat a sweet looking cake.  And it did taste pretty good—more or less. 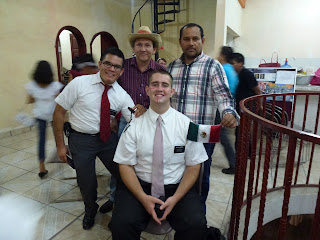 Our "Fiesta Mexicana" the 15th of September in the branch.  The guerrito behind us is the branch president and the morenito is el Hno Roberto (EQP).  They painted us up (even me) like Mexicans and gave me a banderita. 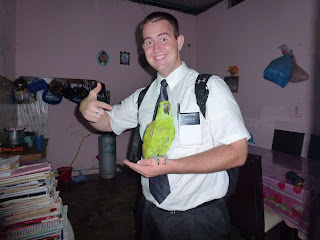 This is Pili.  She belongs to a member of the branch.  And I was terrified in this moment because it was the first time I had tried to hold her.  And she bit me.  But then she climbed on my hand, which was kind of cool.  Parrots are awesome here.  They talk way more than they do in English. 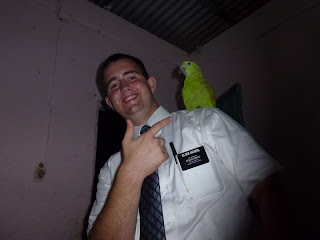 This is when we came back two days later and I got over my fear a little bit and put her on my shoulder.  I had her stay there and we had a wonderful conversation (I really enjoy speaking with animals because it´s the only way I learn how to speak naturally using the pronoun "tú") until she started biting my ear at which point I put her down.  Because we are missionaries, it is required that we use “usted”.  Mexicans basically use "tú" with everyone all the time, so sometimes people think it´s weird for us to speak formally.  Especially when we use "usted" to address a 2-year old child.  Sometimes the little kids don´t understand being addressed in "usted", so we use "tú", which is tough for me because I´m not used to it and I almost feel like I´m saying bad words haha because it really is just strictly "usted" for us (even between companions, which people also think is really weird). 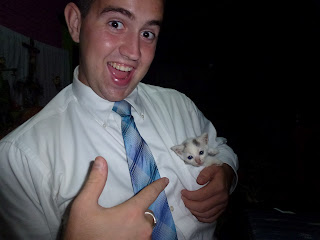 Another one of my little friends who helps me learn how to tutear (very meaning "to speak using tú", which is actually a real verb), but he doesn´t respond to me quite as well as Pili.  I thought it was very clever that I could put him in my pocket, although I do look like a lunatic in this photo (as well as the first one with Pili).  There are no animal control laws in Mexico.  There are a TON of cats and dogs.  And some super nasty dogs sometimes too.  Like really nasty.  But there are a ton of cool birds too, like these little mini parrots that also talk, but not as much (they basically just say "corre corre" but they roll their r´s a lot better than I do haha).  But the big parrots (like Pili), do talk a lot.  They don´t really carry on full conversations or anything like that, but they do say a lot more in Spanish than they do in English.  Pili once told us to come in ("pasenle", don´t try to make sense of that grammatically because it makes absolutely no sense, it´s just what people say here), and the family was like why the heck are you standing in our kitchen (they leave their doors open all the time too because of the heat and lack of AC, so we just walked right in).  It was great.

Well Mama, I’ve got to go if I’m going to have time to type emails to the kids.  I love you.  Take care this week.  You’re awesome and I appreciate you!